Some Unkind Words I’ve been Called

I live in a small Welsh Village, the type of place where everyone knows all the people who reside there, most are inter-related, and it goes back generations.
Walking through the village one day, holding the hand of my then 8 year old son I heard someone shout from across the road. At first I thought it wasn’t directed at me until I heard the word ‘Fat’. ‘I said YOU’RE fat aren’t you’? He said out of his rolled down window. He was parked in the bus stop across the road. I froze. My son pulled my hand.

‘You fat fucking cunt. You ugly fat bitch, you’re so fucking fat, you pig’.
I couldn’t look at my son, the shame and embarrassment I felt for him, the horror of knowing everyone could hear him shout these words at me.
‘I can’t believe how fucking fat you are’. He laughed.
I can’t remember walking across that road, dragging my son behind me, I DO remember knocking on his hastily wound-up window while he, white-faced, looked ahead. I felt utterly humiliated, but for the first time really, REALLY, fucking angry. WHAT gave him the right to ridicule me in the middle of a village?
Fatphobia.

He wouldn’t look at me, I stared at him, continue to bang his window and Shouting ‘FAT CUNT’ at me, he drove off.
This is a normal occurrence for fat people, it’s been happening to me since I was 6 years old. A lot of people think it’s their ‘right’ to take the piss and be cruel, offensive and hateful to fat people.

One of the biggest challenges I think fat people face is not just the abusive, dismissive behaviour we experience, but the fact that it’s considered normal, funny even.
Fatphobia is so ingrained, so widespread, common and pervasive that many of us don’t even realise we have these beliefs, most of the Doctors I’ve been unfortunate to see especially have utter distaste for us, and along with a lot of other people, believe we are lazy, deserve less respect, dignity, and love. We are poor, we smell bad, we are stupid, we are OUT OF CONTROL, and we need to diet. Because, as a health care worker at my local GPs told me;
‘It’s you that stuff’s the food into your mouth you just need to stop it’. I suspect she would tell someone who had an anorexic eating disorder to eat more cake. I am a fat woman. I have never been slim, thin or svelte.
I call myself fat, not as self-punishment but as a truth. I am aware of myself, I am overweight, obese, fat, and if I were offered a pill right now that would make those kilos fall away, I’d take it.

To stop that look of disgust I get from a lot of people.
If people accepted that being fat isn’t as simple as stuffing your face (therein lies another 20 pages) perhaps this abusive behaviour would be seen as wrong?

How do YOU feel when you see an overweight person? Does a well of bile rise in your throat? Do you feel compelled to yell ‘FAT TWAT’ at them?
Oh but they’re just words….
So, you must shout ‘MONG’! at anyone with Down’s syndrome? RETARD at someone with special educational needs and ‘SPAZZ’ at anyone in a wheelchair?
Right? Are you stifling a giggle right now at those 70s names?
I suspect you’d reign yourself in. Because those words are bad, abusive and you’d probably get arrested for a hate crime.
They are not ‘just words’.
All the words in the artwork have been directed at me over the years, I don’t wear them as a badge of pride, it makes me profoundly sad that some people can’t see who I am. 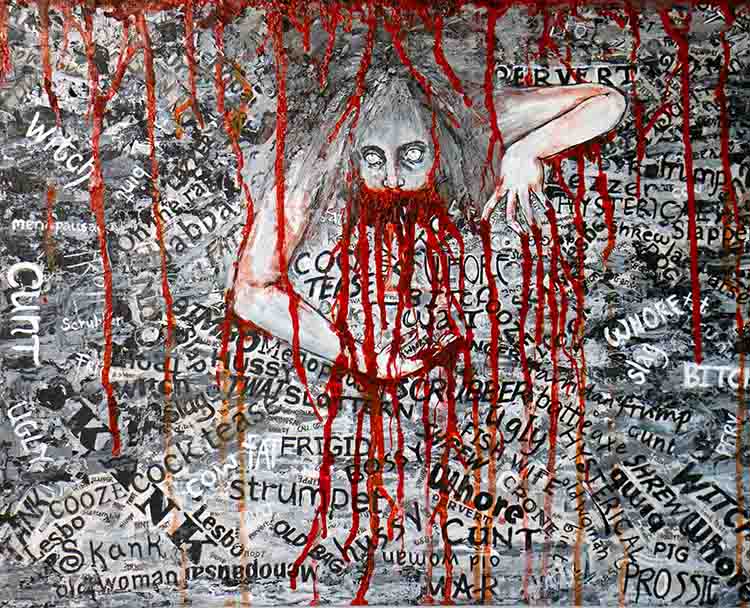 1 2
Gleeda & Blind Granny MacClean The Body and I Exhibition

The Body and I Exhibition