How do you draw a legend?
A legend!! I hear you cry …. That’s medieval King!
And you’d would be right.
Before the Plague gripped this land (Covid not the Black Death) Sara Beer played Richard III in a play written by Kaite O’Reilly about the infamous king

What if someone with the same disability as the king played the Richard? And how about really shaking it up by making that actor a woman?

I’m very proud to be a member of  Disability Arts Cymru and met Sara through the organisation as she’s their senior Arts Officer.  On hearing about her last acting role and Googling it, then seeing her in chain Mail (Chain bloody mail! Awesome) sitting on a throne, I wanted to draw her because she is just so powerfully beautiful in Paddy Faulkner’s portrait. I asked permission off both Paddy and Sara (who both said yes, thanks guys) and made a start.

I decided to draw Sara in pencil, and ended up doing just that and adding some charcoal at the end to darken and smudge.
The one mistake I made is… I used 160 gram cartridge paper, and although its given the piece a ‘smooth’ look I think using a more grainy rough paper would be better, as it would give the pencil something to grip onto.  I’ve now bought some rough grain paper and will report back!

This was time consuming but I found it mindful and calming because of the many MANY chain links. Normally I’d get fed up, and put it away, but this was an important drawing for me as I wanted to it be a tribute to Sara, so drawing all those links were sort of Zen-like.
Another important thing about this portrait is the actual subject, being able to celebrate a disabled actor with no air brushing or smoothing over or expectation of perfection is so liberating!
Several years ago I painted a portrait of my mam and sister, my mam was so unhappy with the way I’d painted her truthfully – as Oliver Cromwell once said ‘Warts and all‘ she didn’t talk to me for a week.   I know that Sara would expect nothing less.  I’ve painted myself a few times  (artists all self-obsessed haha) and rejoice in my jowls and wrinkles because it makes for a GOOD portrait.
Give me Lucien Freud’s Queen everytime! 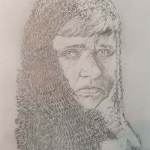 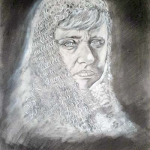 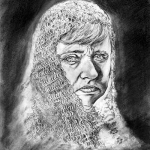 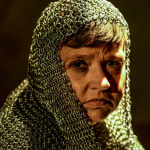